Fifty Thousand. It’s a big number… a huge number. It’s what it cost to replace the “Paracutec Hilton” with a custom-built addition to the buildings at Casa Hogar El Amor de Dios: a new (third) storey containing two dormitories and a play room. 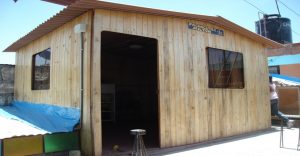 The “Paracutec Hilton” is where the older girls used to sleep: a wooden hut on the roof of the Home. It was too cold at night, too hot during the day, leaked when it rained, and likely to be invaded by the younger girls, given a chance, so not very private.

Fortunately [sic] the 50,000 was not pounds Sterling, or even U.S. dollars, but Peruvian Nuevo Soles. That’s still over £11,600, however; but the building was done at our insistence with an emphasis on health and safety that is, it has to be admitted, unusual in Peru. Not that anything at this Home can be considered extravagant: even the retired “Hilton” has been pressed into service as a useful facility on another part of the roof.

And, it must be admitted, curiosity still lures the younger girls to the new quarters; but at least all concerned are now spared the vagaries of the climate within their sleeping quarters.

This site uses Akismet to reduce spam. Learn how your comment data is processed.